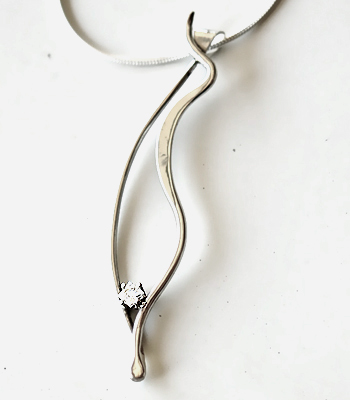 I recently had to wait with my children, and they asked me to make up a story.  About what?  I asked. After stories for the light switch, the potted plant, and my shoe they said, : About your necklace, Mommy.  This is what I told them:

A thousand bedtimes ago, in a land far away, the sun was very lonely.  All day long he would work his way across the sky, and see all the creatures in the world laughing and enjoying themselves in his warm sunlight.  They played in the lakes and streams, and watched the waters dance and shimmer in the daylight like drops of diamonds. The sun loved to share his warmth and light with the little creatures, but he was also very sad because every one of them had a friend and he did not.

No one came up to him and wished him good morning. None of the creatures smiled extra-wide smiles just because they saw him. In fact, none of the little creatures really noticed him at all.  His light and warmth, yes, but not him for himself.  So he became sadder and lonelier with every passing day.

One day, in the middle of June, a little fairy noticed that the sun seemed to be drooping and fading somewhat in the sky. The days weren’t as warm as they usually were, and the light wasn’t as bright. In fact- the beautiful days of early summer looked more like the cool crisp days of Fall! Something was definitely wrong. She tried to go up to him and find out what was the matter, but  try as she might, she couldn’t fly that high.

So she flew up to the highest mountain in the world, and had her friend the Dragon try to yell loud enough to make their message heard.  But the Sun was so far away, he didn’t hear them.  And he was so sad- he didn’t notice them.  They tried again and again to make themselves heard,  but the Sun slipped over the horizon and was gone.

But someone had heard them after all.

The Moon turned his kind face to them and asked on a cool night breeze what the problem was. They explained, and he thought for a moment, then smiled.  “Little Fairy, I see you all the time in my travels across the sky.  You are always so happy and cheerful. You smile brightly, and sing beautifully.  Except for last week.  You were so sad.  Why was that?”

The Fairy looked at the Moon in surprise. “Why, it was because Dragon was on vacation with his family, and I missed him.  He’s my best friend in all the world, and it’s not as fun to play and sing without him. So I was sad.”

“Then perhaps you should ask the Sun’s friends to cheer him up.” said the Moon.

So the Little Fairy and and the Dragon combed the earth far and wide to find the Sun’s friends to ask them to cheer him up.  But they could find no one who was a friend of the Sun.  The little Fairy was horrified.  “Imagine having not one friend! ” she exclaimed to Dragon.  Dragon was also upset.  Such a great fiery creature like the Sun should have lots of friends.  So they went back to the mountain to ask the Moon what to do.

The Moon also looked very upset when they told him that they could not find anyone who was a friend of the Sun. He frowned in mighty dismay.  “What a terrible thing! I have always admired the Sun, for he is such a splendidly cheerful fellow, but I imagined he was too busy for the likes of me.  I would be his friend, but I would never see him as I am up all night, and he is up all day.”

The little Fairy was thinking very carefully indeed, and she turned to her friend the dragon and said, “Maybe we can send the Sun a present to show that we are thinking about him.  Something from all of us, but how would we get it to him?”

The dragon roared in excitement.  “My cousin the Phoenix could take it to him- she has always wanted to visit the Sun!”

So it was decided. The Moon would give some of his moon beams to the Fairy. She would forge them into shape, and the dragon would fire them with his fiercest flames.  The phoenix, upon seeing the pendant added a brilliant-diamond smile which was tucked in the center, and they all included their best wishes.  At last the little package was ready, and they watched the Phoenix fly on her way.

The next morning, the sun shone more brilliantly than ever, and fairly danced his way across the sky.  The Fairy and the Dragon both waved as he passed over head, and he waved his rays in return- spilling a gorgeous glimmer of stardust across the afternoon sky.  As the star dust fell to earth, the Fairy and the Dragon realized that they’d been given pendants in return, adorned with the glimmer of Star Fall.

Now the Sun is no longer lonely, for he has lots of friends.  He smiles brightly down on them, and they smile brightly back, well content in friendship.  Occasionally the Phoenix brings him the smiles and best wishes herself, for he really is a wonderfully cheerful person and an excellent friend.