I am not normally one to get excited about pink. Other people I know are, but pink and I don’t usually get along. Except when it comes to Rhodochrosite. A stunningly pink banded mineral, and a truly magnificent stone that is not only pink, but practically stands up and sings “I just gotta be me” in all it’s unashamed hot pink glory. You’ve just got to love a stone like that.

Rhodochrosite is one of those stones that is a designer’s secret weapon for two very good reasons. The color I’ve mentioned, but second are the exceptionally intricate patterns.

Rhodochrosite is often mistaken as a pink form of Blue Lace Agate, when in fact it’s formed by groundwater dissolving manganese bearing rock. Manganese is present practically everywhere you look, so Rhodochrosite variations are rather common. Pure gem grade Rhodochrosite that is lovely and clear is very rare, however, because the very nature of groundwater and manganese causes both substances to bond easily with everything else. Which means that the mineral is usually diluted with other minerals making the colors muddy and washed out in inferior specimens.

What I find fascinating is the belief history behind the gem. Incas, for example, believed the mineral was the blood of royalty transformed into stone. Spiritualists believe it can help one to focus on (and obtain!) what you want, or help you be true to your beliefs. Sounds like a good stone for all of us scatter-brained people who try to do too much. 🙂 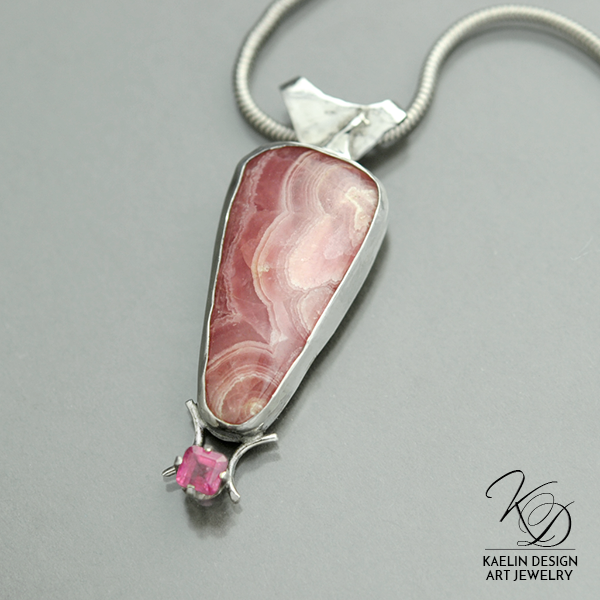 On the MOHs scale, it rates a 3.5-4, making it rather soft, which we’ve seen is only to be expected from groundwater formed stones. Still, because it’s a mineral usually formed as a cabochon, and because of the interior rhombohedral crystal formation, the stone is sturdier than you might think. Rhombohedral means that it forms slightly squished cubes, that cleave(or split) well along it’s planes. So at worst it’ll crack or fracture along the bands, but shouldn’t chip or shatter.

Because of the bands, however, you want to be careful cleaning it. No sonic or steam cleaners, and be very very careful about cleaning chemicals. Mild soap and water followed by a lint free cloth should be just fine, although you can always contact me for a bottle of safe jewelry cleaner, if you need to loosen tarnish.

Whatever your beliefs, though, Rhodochrosite is a stunningly beautiful stone, and as the stone ranges from the very affordable to exorbitant, there’s a a Rhodochrosite for every one.